The Stampede features the default N-Strike yellow, black, and orange color scheme. It has digital camouflage detailed on the blaster, much like the Raider CS-35 and the Longstrike CS-6. It does not feature an external priming mechanism, as the blaster is powered solely by batteries.

It features six tactical rails, the most of any current Nerf blaster. One is on top of the carrying handle/built-in iron sights, one is above the barrel, two are beneath the barrel, and the last two are on both the left and right sides of the main body. Any accessories mounted on the latter two or the carry handle are blocked when the included Blast Shield is attached above the barrel.

Like most blasters, the jam door is located on top of the Stampede, under the carry handle. It does not have a lock and can be opened at any time to remove jammed darts. 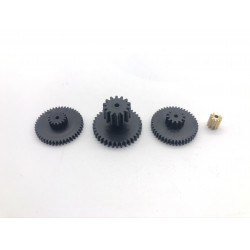